How to end summer vacation

Pretend like you planned it all along
It ought to be illegal to spend the last Saturday of summer vacation at home. My son has been nagging me about getting to the beach before the end of summer from the day school ended in June. So rather than shut him up and take him the next day, I procrastinated until the last weekend before school started.

I rolled out of bed at 2 p.m. Saturday afternoon because I made the big sacrifice the night before and waited in my car outside of a Denny’s until 12:30 a.m. while our church youth group bonded over cut-rate food. I knew it was important for him so I sucked it up knowing I’d get to sleep in possibly all day. However, my son dropped in and informed me he hadn’t been to the beach all summer and wanted to go … now. I rolled over and moaned.

After he left, I immediately got up, dressed and said, “pack a jacket and let’s go.” Of course, he wanted to know where so I gave him my father’s pat answer, “Wherever the car takes us.” I start to think it might be a great opportunity to go fishing so I pack rods, reels, cooler, tackle box, chairs and sportbrella. Max thinks we’re going fishing … and so do I but God had different plans. 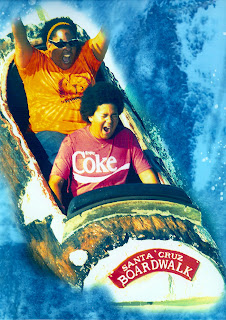 As we drive over the hill on curvaceous Highway 17 I lecture my son about safe driving, defensive driving, the difference between arrogant and confident driving, and the time my father made me do the ridiculous while driving with a learner’s permit. I drove my father’s white Buick Regal with turbo towing his 17′ Boston Whaler.

Seriously, Dad? Yep, he was good for some things
I also was trying to feed my face while driving a car with six of us in it. Dad was the only one with a backseat driver’s license so he was barking at me to pass a tow truck that was towing a car while I was eating. That’s right. My father made me, who was towing a boat, pass a tow truck that was towing a car on a notoriously dangerous and windy road in the Santa Cruz mountains. It scared the bejeebers out of me and everybody in the car except Dad … but I did it.

We have arrived … as planned
As we were hunting for parking I hear my son lamenting on how he better ride a big rollercoaster before he gets a girlfriend. What he didn’t realize was I was about to continue a family tradition.

Mercifully, I find a metered parking space three blocks from the Boardwalk and whip out my free metered parking pass, aka, disabled placard. We left fishing gear and jackets behind since the weather was incredibly perfect. It was obvious we’re not fishing so I bought wristbands for the entire day or what’s left anyway.

I didn’t even blink or think twice. We started walking toward the Giant Dipper. I tell him that perhaps it might be easier to ride the Giant Dipper if he gets on a smaller rollercoaster first.

Oh Dad … again: my father’s legacy lives
I tell him how I wish my father had done that before taking me on the Giant Dipper and making me sit in the very front car for my very first big rollercoaster ride. Max thinks that’s a great idea. We get in line for the Giant Dipper but he’s clueless.

He sees a face painting vendor so he assumes we’re getting in line for that. I tell him there’s a smaller coaster within the Giant Dipper. The logic hasn’t hit him yet. I tell the couple behind me the real scoop and they are all in, giggles, snickers and all.

TV screens talk about the history of the Giant Dipper and even show a photo of Vincent Price when he rode. He loves Vincent Price because of his role on the Thriller soundtrack. He loves Michael Jackson.

When we turn the corner so you can see the Giant Dipper track and coaster cars coming and going. He figures it out. When we get to the front of the line I tell the attendant that I’d like to wait for the front car, please. As it turned out, we were next for the front car anyway. We get in and he’s nervous but I won’t steal the movie’s thunder. Check this video out. <—-

An awesome day on the Boardwalk
It was immediately followed by a ride on the Logger’s Run. I was able to talk him into riding the Logger’s Run water ride only after I got him to turn off the Boy Scout mantras about wet clothes. We got soaked. He begged to ride again. 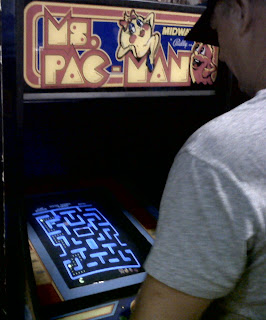 We rode bumper cars, ate corn dogs and bottled water, then headed directly to the arcade. The last time I set foot in that arcade was sometime in the 80s. We got a ton-o-tokens and spent about two or more hours playing skee ball, shooting, and riding this motorcycle race game where you couldn’t wipe out even if you tried. We travailed through Yosemite, Paris, Moab and Vegas. So much fun even though my son beat me once.

The best part of the arcade was the old school corner. I was hoping against all hope that my favorite arcade games would be there and OMG! they were. First I found Ms. Pac Man. The people hovering around it were hilarious including me. They all were about my age and we were pumping that game full of tokens. One guy and I were kidding that we were spending our child’s college savings. 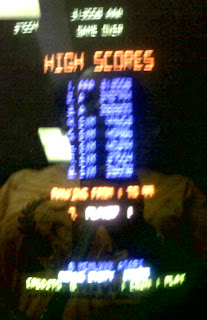 When I told him I wish they had my first arcade game love, Tempest, he pointed and warned me that one of the controls tends to stick. Gone. I was gone immediately. There she was: Tempest the arcade game console. I was in heaven. My two favorite arcade games staring together again.

In true baby boomer fashion, I got seven of the 10 high scores. It was like riding a bike. Ms. Pac Man must have been on acid. They set the icon to travel so fast, I was sweating trying to escape the ghosts. I was only able to make it to the apple level but saw another woman about my age get to the second banana. Sigh.

Dinner consisted of Shrimp Ceviche for me and fried calamari and fries for Max. He had a coke and I had a Heinee with a side of water. As we ate we watched people play volleyball. After dinner I was standing in line for the Drop Zone then the lights went out. You should have seen all the cell phone lights turn on like that old Ericcson phone commercial. Too funny watching ride supervisors running around like chickens with heads cut off. 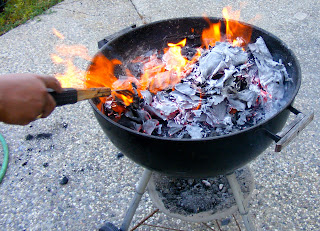 Afterward we got some candy at Marini’s and finally left around 10:30 p.m. We had such a blast.

Oh! One more thing
Max had been bugging me about burning his math notes and I stalled on that one too. Sunday night I planned to have Trip-tip with a Caesar salad. I asked him to setup the BBQ and he asks again. “But Mom, today is my last chance. Pleeeeeeeease?????” I reply, “Okay but after you set it up, wait for me.”

Five minutes later I smell smoke. He’d already drowned it in lighter fluid and my little pyromaniac couldn’t wait. I end up tending to the fire figuring out very soon that it’s not just his math notes. It’s everything. The collateral damage ended up being his first quarter honor roll certificate. 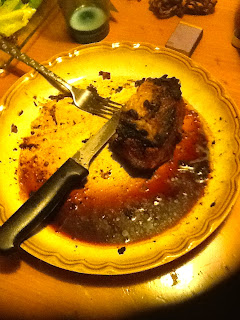 I wasn’t sure whether I’d still be able to do the BBQ but once I burned off all the paper the coals lit up just fine. Then we had our first science experiment of the new school year.

Hypothesis: Tri-tip taste better on the BBQ when you start the fire with last year’s notes from school.
Conclusion: Although there appears to be no taste difference there is definitely more satisfaction. He did take enough for lunch.
I hope you punctuated your summer with lots of fun too! Tell me what you did this summer.
ABOUT BORICUA CONFIDENTIAL©™
Boricua Confidential chronicles my new life as a single mom of two kids after my husband died from cancer on our son’s seventh birthday. Join me on this journey of change, revival, reformation, discovery and new direction ordered of God. Being a widow ain’t easy, that’s for sure. I refuse to rollover and die. Quite the contrary. I intend to thrive from this crazy life. You can’t keep this woman down. If I’m down, I won’t be for long. 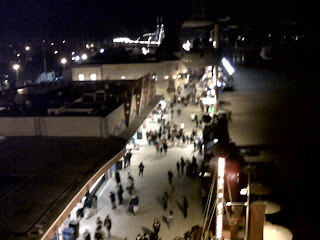