31 Days of God-related attitude
That’s right! You read it here first. I predicted a sweep and tonight it appears the Giants are on the brink of that sweep. They have had no offense and the pitching can’t stop the unstoppable Giants. They have the momentum.

Destiny is on their side and so is Jesus. Yes, I said it. Jesus is a Giants fan. We’ve all heard the axiom, “Lies, damn lies and statistics.” Well according to Joe Buck, CBS sports, no World Series team has ever come back from a three games to zero deficit. Cherry. That’s a statistic I can live with.

I felt so sorry for Detroit Tigers fans last night. I’ve sat through many a Giants home game freezing my butt off during a night game because there was nothing to cheer about. 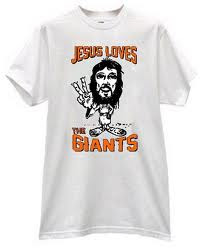 Then they appeared to have reason to shout during the fifth inning when bases were loaded with two outs. Ryan Vogelsong sang them a lullaby and it was all over after Tiger’s star slugger Miguel Cabrera hit a popup to shortstop Brandon Crawford ending the inning.

Reliever Tim Lincecum and closer Sergio Romo were tight and right in the strike zone. They exposed how impotent Tigers batters were. Ouchie!

The fat lady is warming up
I can hear her performing warm up exercises and scales. The Giants are on the brink of their second World Series title within three years.

Just do it, guys! I believe in you all!