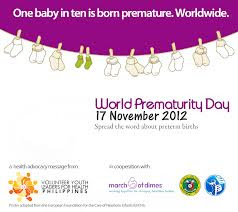 World Prematurity Day is Nov. 17, 2012
This is part of a four-day series on preemies, RSV and related complications. I hope you’ll join me as I recount my firsthand experience with my firstborn daughter.

Won-ton soup food poisoning?
It was about 3 a.m., Monday, April 10, 1991, when I felt the first of many sharp stomach cramps, at least I thought they were stomach aches. I couldn’t go back to sleep no matter how hard I tried. I’d never felt such pain before. I was in my second trimester so I was in complete denial that I was in labor. 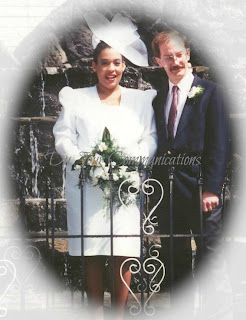 A few days earlier, I had felt her kick for the first time while I was taking a nice hot bath. I nearly leapt to the ceiling with shock and excitement. I called my newlywed husband over to come and feel our first child’s in-utero movement.

I also was having difficulty understanding why I was leaking fluid.

That’s her at our wedding April 1, 1991, at Love’s Wedding Chapel, Stateline, Nevada. See her? She’s the one behind my bouquet of flowers.

My husband and I had done some foolin’ around while we were dating and got caught without a condom and proper birth control. I probably missed a dose or two making it easy to conceive.

I also was engaged in recreational pot and alcohol use with my then boyfriend, Edd. We loved to party and there were times I should have been picked up for DUI.

For at least a full month before I knew I was pregnant, I engaged in partying with reckless abandon completely unaware of the little light I was carrying inside. Imagine my shock as the pregnancy tester was screaming, “You’re pregnant!”

All I could think of was the Halloween party I was at where I was so drunk when I got home, I passed out and didn’t hear my boyfriend call me to open the door. He got picked up on a DUI that night instead of me. I don’t remember driving home. I also should have been arrested.

Premature labor
Anyway, I called the hospital when I got to work. I described the intense pain I was feeling and they told me to report to Labor and Delivery pronto. I told them that wasn’t possible. It was too soon. I wasn’t expecting to deliver my child until July 25.

Nevertheless, I told my husband who worked in the same office that I was on my way. He offered to drive but I told him I was fine. It was simply an upset stomach. I’d be back later. I never returned.

I reported as instructed. I told the L&D nurse I had eaten Won-ton soup the night before and that had to be the reason for the pain. Couldn’t they simply give me high-powered bismuth-type fluid and send me on my way? I was certain it was food poisoning. They humored me and said they wanted to rule out labor as a possible reason for abdominal pain.

After I was hooked up to a machine and physically examined not only was I in labor but I was very dilated. At the very least, I would have to be on bed rest for the remainder of the pregnancy either in the hospital or home. However, my body was preparing to expunge a defective pregnancy.

Despite their best efforts to stop contractions, an amniocentesis revealed I had an infection in my amniotic sack. It was life threatening for both of us. The only option left was premature delivery.

Ready or not here she comes
The doctor expressed his condolences for the loss of our firstborn child. She was given a 10 percent chance to live. We were devastated. However, the presiding nurse gave us hope.

She knew it was a girl by her presentation. She had her hands at her forehead as if praying. She said that was usually a strong sign it was a girl. Made no sense to me but I went with it anyway.

Next she pointed out that Black children, females in particular, tend to have a better chance at post-partum survival than Caucasian children. The fact that I was Hispanic and Black, i.e., AfroPuertorriqueno, increased her chances of survival.

She was large for her stage of development due in part because I drank whole milk as if it were water because it tasted sweet like cream. I couldn’t get enough.

I thank God for giving me the overwhelming urge to drink something to prepare her for survival outside the womb. The nurse told me drinking that much milk also could make the difference in whether she lives or dies. However, my husband was absolutely convinced that she would survive regardless.

Edd had a faith I didn’t understand. I was Catholic. I gave up. He was Protestant. He believed miracles were still happening and available if only we believed. I borrowed his faith. My faith tank was obviously empty.

My husband and I decided on her name: Tatiana. My husband was reading Tolstoy to me and we loved the name. She was our little princess.

Delivery
Doctors induced labor using pitocin. About an hour later I was in the delivery room. I could barely feel her pass through my vaginal canal. Next thing I hear is a “splat” noise immediately followed by a nurse who immediately intubated her. Edd and my parents were there in the room as I gave birth.

No cries, no baby sounds, no nothing. The only thing I saw was this red blob being rushed to the polar opposite end of the room for intubation. She wasn’t placed on my chest for instantaneous bonding, no photos, no sighs of relief, plenty of tears full of mixed emotions was had by all.

I didn’t get to see her until about an hour or so later after a proper Catholic baptism in case the seemingly inevitable happens. After all, she was a “micro preemie,” a preemie weighing less than 1 lb., 12 ozs. Tatiana weighed 1 lb., 7 ozs.

Our wedding bands easily slipped up and down her arms and legs. She wasn’t much bigger than a $10 bill.

I was assigned a private room. They underestimated the trauma of leaving the hospital without a child and riding in the same elevator as someone who was discharged with theirs.

What was my part?
My mind was obsessing. I was thinking it had to be the two glasses of champagne I had at my wedding but a nurse explained in detail how that was impossible.

Furthermore, my doctor gave me permission to have no more than two glasses of champagne at my wedding. Over the next 102 days, our nurse would remind us how she has seen krack babies and fetal alcohol syndrome babies who were seemingly in much better shape than mine.

Champagne had nothing to do with the reason she came early. Unfortunately, to this day my parents and in-laws blame me for her premature birth because I drank those two glasses of champagne, which they believe “caused” her premature birth.

My aunt later reminded me my mother was sloppy drunk at a party when she was pregnant with my baby sister. I love reality checks and perspective.

Rather than going directly to the warming bed where my daughter was, I had to go through a ritual hand and arm cleansing then don a yellow, sterile robe. They asked me if I was certain I wanted to see her, that it could be traumatic.

What mother doesn’t want to see her newborn? I resented gatekeeping procedures. That was my daughter. Nothing and no one was going to keep me from her. However, I was ill-prepared for what I was about to see.

I ran out of the ICN in tears. The priest tried to console me. She was grotesque. Her skin was a deep red, she had leads from several monitors, a bilirubin mask over her eyes, a tube down her throat and an IV for fluids and medication. I nearly threw up.

I was inconsolable. I was miserable. I obviously failed to bring a healthy child into this world. No one could possibly understand how I felt.

The first ICN nurse removed herself from my daughter’s care for numerous reasons one of which was my husband and I simply didn’t get along with her. She was playing Hitler Jr. and very restrictive about our visits.

A new nurse, Marcene, was assigned. It was a match made in heaven. We loved her to pieces. She understood what we were likely feeling, experiencing and our concerns as nubile parents.

She gave me a card to carry in my wallet. It read, “There are only two things you have to do in life: You have to live and you have to die.” She was just a really great nurse, source of information and we appreciated her tremendously.

We had no idea what to expect. She recommended we purchase and read, “The Premature Baby Book,” by Helen Harrison. No one in our family had a preemie before. There were absolutely zero points of reference and no other literature out there for parents of preemies. 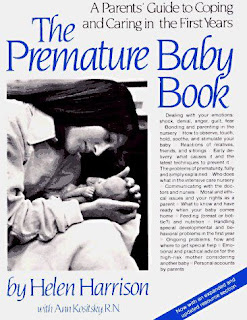 Furthermore, our baby girl was in desperate need of multiple blood transfusions. However, not everyone was eligible to donate blood. They had to test each potential donor for respiratory syncytial virus (RSV), a very common virus leading to mild, cold-like symptoms that can threaten the life of babies. Preemies are particularly vulnerable.

My husband was an avid, frequent blood and apheresis donor at Stanford. We felt he was a shoe-in for a donor for his own daughter. He tested positive for RSV.

Coworkers were eager to donate blood and went out of their way to get tested. Those who tested negative donated. We tried to keep it in all in the family but transfusions were needed so frequently, we eventually had to rely on blood banks to fill in.

As it turned out, about 18 months later she would contract the virus anyway. Read tomorrow and I’ll tell you which post will talk specifically about RSV in more detail.

Ahead of her time, a four-part series on my micro preemie
Part One,  Ready or not here she comes
Part Two,  The rough road to discharge
Part Three, Finally home: Let the nightmare begin
Part Four,  Water on the brain, RSV, happily ever after